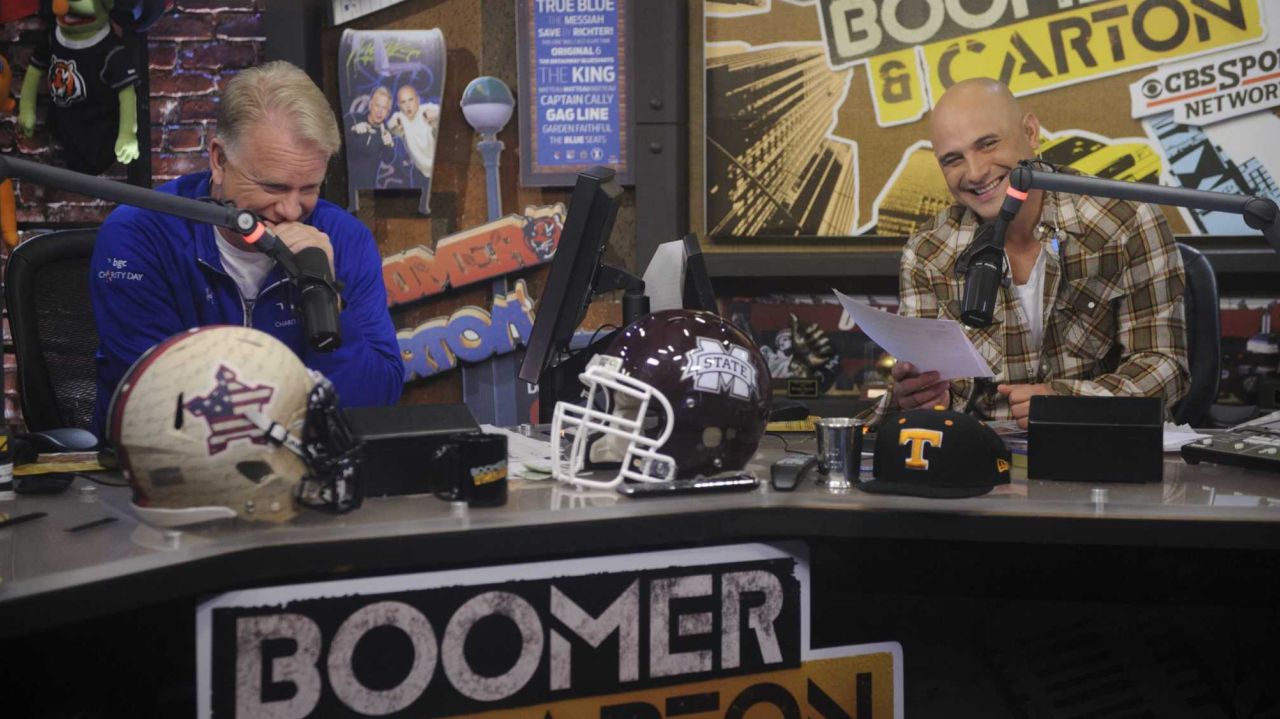 Boomer Esiason and Craig Carton on the set of their WFAN Radio morning show in 2014. Credit: Charles Eckert

The phone call came in around 10:33 a.m. Tuesday, and Boomer Esiason wasn’t quite sure if he should believe who was calling.

“I get off the radio, I see a number pop up on my screen. I’m thinking, 'Is this spam, what is this?’ ” Boomer Esiason said on WFAN’s morning show on Wednesday. “I answer the phone, I say hello. I hear a very familiar voice saying, ‘Hey, it’s me. I’m out.’ ”

That person calling him was his friend and former co-host Craig Carton, who had just been released from federal prison after serving just more than a year of a 42-month sentence for running a ticket-resale Ponzi scheme.

“What I heard was a happy and relieved Craig Carton. He got out about two years earlier than the sentence required. But he did everything he possibly could in jail to mitigate his sentence and try to get out as early as he possibly could.

“There was some thought that maybe when this coronavirus hit, and they were releasing prisoners, maybe he would have been part of that. But that never happened for him. So he had to stay within these classes that he was taking in jail, as I understand it, to try to limit the amount he was going to spend in jail.”

Esiason said Carton’s family was there to pick him up in Lewisburg, Pennsylvania.

“Now the real work begins for him. And that’s rebuilding his life. He paid his debt to society, he did not get out because of coronavirus. He got out because of all the things he was doing in prison to get early release,” Esiason said. “I’m proud of the fact that he did that. I’m happy for him. I’m happy for his family. I’m happy, really, for his kids, who had a tremendously difficult ordeal over the last three years. I do believe he deserves a second chance, whether it be here at our station or another station. He’s too talented not to be on the air somewhere.”

Carton has a very close relationship with Chris Oliviero, now Entercom New York’s senior vice president and market manager. He helped bring Carton and Esiason together to host the morning show in 2007. Oliviero told Newsday recently that if the time comes where Carton got his life back on track, “of course” they would talk.

Carton was arrested on Sept. 6, 2017 and resigned from WFAN on Sept. 13. Carton was convicted on Nov. 7, 2018, of fraudulently raising more than $5 million from investors by lying about ticket deals and using their money to repay massive gambling debts and former investors. He was sentenced on April 5, 2019, and began serving his sentence on June 17 of that year.

“He deserves another chance in my eyes,” Esiason said. “Whatever issues we had after this whole thing went down, they’re gone. As far as I’m concerned they’re gone.”

“Gregg, you came in and you basically kept this thing going,” Esiason said. “And we’re going to stay together, as long as I know, as long as you’ll have me and we’ll continue to do what we do. And hopefully Craigy someday will be able to get back doing what he does and does so well.”

Giannotti said Carton is too good of a radio personality not to get another opportunity somewhere.

"Where that’s going to be and when that’s going to be, I don’t know," he said. "Of course, when you talk about this show and moving on, and me being here, it’s probably and most likely not going to be here. But that doesn’t mean it can’t be on the radio station years down the road somewhere else. Who knows? I don’t know. But I am happy that he’s out and I’m happy he’s going to get an other opportunity.”

Giannotti said he feels indebted to all the people who had success at WFAN because it helped him have a career and success of his own.

“If he’s part of the team and we’re teammates again, I think that that would be absolutely awesome,” Giannotti said. “He did a bad thing, served the price, paid the price, and now this is where the redemption story starts for him.”

Esiason did caution Carton on one thing. “If he thinks he’s getting shortstop back and leading off, that ain’t happening,” Esiason said, referring to WFAN’s softball team.

Esiason, Giannotti, producer Al Dukes and update guy Jerry Recco all sounded happy for their former colleague as he begins to rebuild his life.