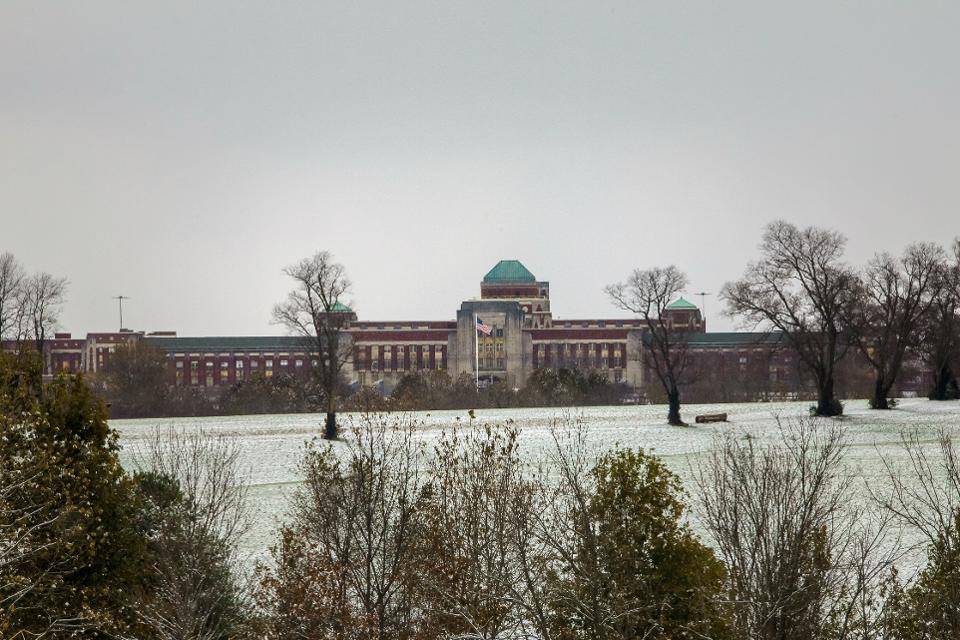 As you drive along the picturesque rolling hills of central Kentucky horse country you may unexpectedly pass by a leviathan of a building draped in barbed wire and nestled among the surrounding farm land. The entrance rises up along concrete two massifs, leading to brick and concrete arms stretching out around a square yard filled with a metal labyrinth of chain linked fences and razor sharp spirals of barbed wire. With an American flag waving at the entrance, the building, both beautiful and foreboding, seems well suited for a quintessential American haunted house movie, but holds within it a fascinating history that is still playing out today in the wake of the opioid epidemic.

The Federal Medical Center (or FMC), of Lexington, Kentucky is currently a federal prison for inmates requiring medical or mental health care, however, when it was first created it was known by another name; Narco. Originally named the United States Narcotic Farm, Narco opened its doors in 1935 and was a radical, and ultimately doomed, experiment on how to understand and treat drug addiction in the US. The coed facility not only housed convicted drug offenders, but also those who voluntarily checked in for drug rehabilitation. Throughout its history the facility became an ultimate destination for any and all drug addicts of the first half of the 20th century. The facility housed everyone from famous jazz musicians, to addicted doctors, to drugstore cowboys, to William Boroughs, who notably wrote about his time at Narco in his book, “Junky”.

Narco’s schizophrenic inception and life shines a light on how US drug policy has developed today, as well as offers insights and cautionary tales when it comes to addressing drug addiction nationally in the wake of what is essentially America’s second opioid epidemic. Today, with 45.2% of inmates being convicted on drug related offences according to the Federal Bureau of Prisons (an overwhelming majority of the prison population), the connection between drug addiction and incarceration is still salient. In fact, the very creation of the Narco facility came about for a parallel reason.

As Nancy D. Campbell, JP Olsen, and Luke Walden outline in their profound publication “The Narcotic Farm,” Narco was originally created to address the United State’s ballooning prison population. In the 1920s, about half of all prisoners were incarcerated on drug related offenses as a result of new opioids, such as Bayer’s heroin (which became available in 1989), flooding the markets, couple with the responsive implementing of aggressive new drug laws like the Harrison Narcotics Act, enacted in 1915. Similar to today, aggressive drug policy and ultimately insufficient understanding of drug addiction on the part of the federal government are keeping prison populations high. However, in the 1920’s there was a distinct desire on the part of medical and prison professionals to both understand drug addictions (largely for opioids), decrease prison populations, and find a cure for drug addiction, which the federal government more liberally supported.

The opening of Narco was part of the “New Deal for Drug Addicts” and was considered to be an effective compromise between drug enforcement hardliners and social progressives of the 1930s. The nature of Narco’s population ebbed and flowed, but ultimately it started with the volunteer self-committing of all manner of addicted drug offenders, as well as non-incarcerated addicts for treatment (Narco would later only house volunteer inmate populations exclusively). Those seeking treatment at Narco were referred to as “patients” rather than “prisoners” and the rehabilitation therapy was based on “moral therapy” and “self-improvement” techniques of rehabilitation, which were some of the first forms of behaviour therapy used in the US. The facility also offered work and farming programs, numerous sports facilities, as well as arts and crafts facilities, which gave it the distinction of being a “country club prison”.

While many of the therapies used back then are largely out of date today, at the time they were the only understood method and the use of them at Narco underlined a larger reality - that Narco, one of the only drug addiction treatment centers in the United States, was a government funded facility and ultimately one of the US’s most liberal attempts to curb drug addiction and abuse historically. This is an interesting comparison to today’s standard of drug rehabilitation, which is far more (and, at times, detrimentally) dependent on the private sector. For example, as reported in April of 2019, the Sackler family, owners of Purdue Pharma looked into profiting off of drug rehabilitation treatment for the very opioid crisis they had a primary hand in creating (which the company notably does with drugs, such as Symproic, that alleviate the secondary symptoms of addiction). Similarly, as highlighted back in 2016 by John Oliver, the privatisation of drug rehabilitation facilities (much like the privatisation of prisons) disturbingly prioritises again and again high recidivism among its populations to keep profits consistent and high.

However, the facility’s consistently high relapse rate (which stayed around 90%) coupled with continued aggressive US drug policy, kept prison populations and recidivism high and cornered medical doctors and researchers into a frustrating stalemate. The Narcotics Control Act was enacted in 1956 and was America’s first foray into the disastrous policies that eventually led to the “War of Drugs” of recent memory. The act imposed a five year minimum sentence for first time possession and a death penalty provision for dealers and ultimately maintained the social idea that drug users were far outside of society and should be punished rather than rehabilitated. While this policy is slowly being reformed today, there are still people incarcerated in the US prison system for these outdated and draconian policies and it could be argued that the legacy of these policies still echo throughout law enforcement. These policies have also leached into today’s political landscape in more subtle ways and have contributed to the staling of drug reform, steered money away from harm reduction treatment, and kept the governments hands out of direct drug rehabilitation.

President Johnson’s enacting of the Narcotics Addiction Rehabilitation Act (NARA) in 1966 further funnelled inmate addict populations into Narco, however, prior to the Prisoner’s Rights Movement of the 1960s and 70s, the seeds of the ultimate downfall of Narco were being sown - Narco was experimenting on volunteers. The lack of understanding of drug addiction coupled with the lack of prisoner rights reform created the perfect situation at Narco for decades long experimentation programs. “Hopeless junkies” were re-addicted to opioids and studied and the facility, in some ways, transferred its operations to effectively creating a situation of legal drug addiction. Until 1955, patients would be offered time off their sentences, or even payment for their services in drugs.

While the issues inherent in this prisoners-as-guinea-pigs model are undeniable, the effects of the policy can be seen in ways today that make its history more complicated. New drugs were tested on Narco volunteers and then deemed safe or not for release to the general public. This system kept drugs such as ketobemidone out of the general market and restricted their use to hospitals. Narco was also responsible for the development of methadone, which is still used in medically assisted rehabilitation today, and there are still numerous studies that came out of the facility that have positively contributed to the understanding of addiction and treatment.

Ultimately, the death blow to Narco can be summed up in two acronyms; CIA and LSD. In the wake of the infamous MK-ULTRA experiments conducted by the CIA in the 1970s Narco fell to history. Interestingly enough, while the MK-ULTRA experiments are overwhelmingly understood to be unscientific, unethical, and dangerous, the experiments done at Narco were the safest and most transparent, and their results are still accepted and useful to the scientific community today. The final Narco patient was transferred out of the facility on December 12th, 1976, completing the facility’s 41-year history.

When all is said and done the Narco facility contributed a number of things to the understanding of addiction, as well as how federal drug policy has shifted in America today. The ultimate take away from the history of Narco is that it highlights a time when the American government, albeit very imperfectly, somewhat supported a vested interest in directly treating and understanding drug addiction. Unfortunately, policies in the years after Narco closed still fail to take these lessons to heart.

For example, despite overwhelming evidence in favor of harm reduction programs, the federal government still steers far away from supporting such programs (even going so far as to prosecute them in some cases), leaving communities to fend for themselves. President Trump’s budget for 2019 allocated $1,137,403,000 to the National Institute for Drug Abuse (NIDA), out of an approximately $4.4 trillion dollars 2019 federal budget. Yet, with drug addiction costing the US “$740 billion a year in healthcare, crime, and lost productivity,” according to NIDA, and 47,092 people having died in 2018 from opioid overdose, according to the White House’s National Roadmap To Combat The Opioid Crisis, the support and ingenuity to really put a damper on opioid addiction in the US still is not near where it cold be.

Despite the fact that numerous other countries have effectively addressed, treated, and reduced their issues with drug addiction with a myriad of innovative and brave social policies, the political will from administration to administration (and political party to political party), just does not seem to exist in any meaningful way in the US. On a positive note, $945 million federal dollars are being funnelled into various research efforts, such as NIH’s HEALing Communities project. However, while research is important, if it is not paired with and dictated by direct action, the government is simply staving off addressing the problem and Americans are loosing their lives along the way.

← The Nuiances of Drug Detox Program
When Mental Illness Is Severe →